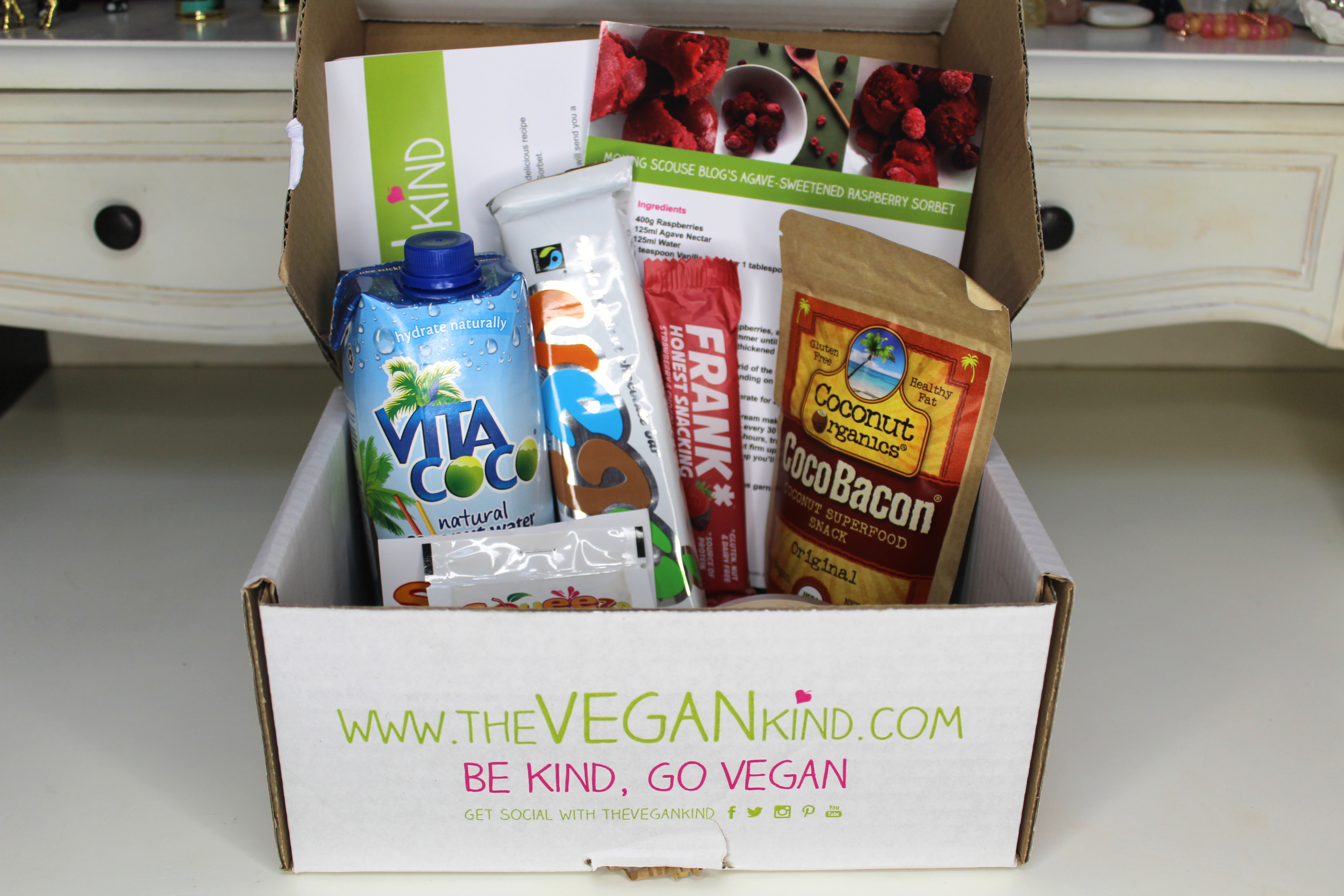 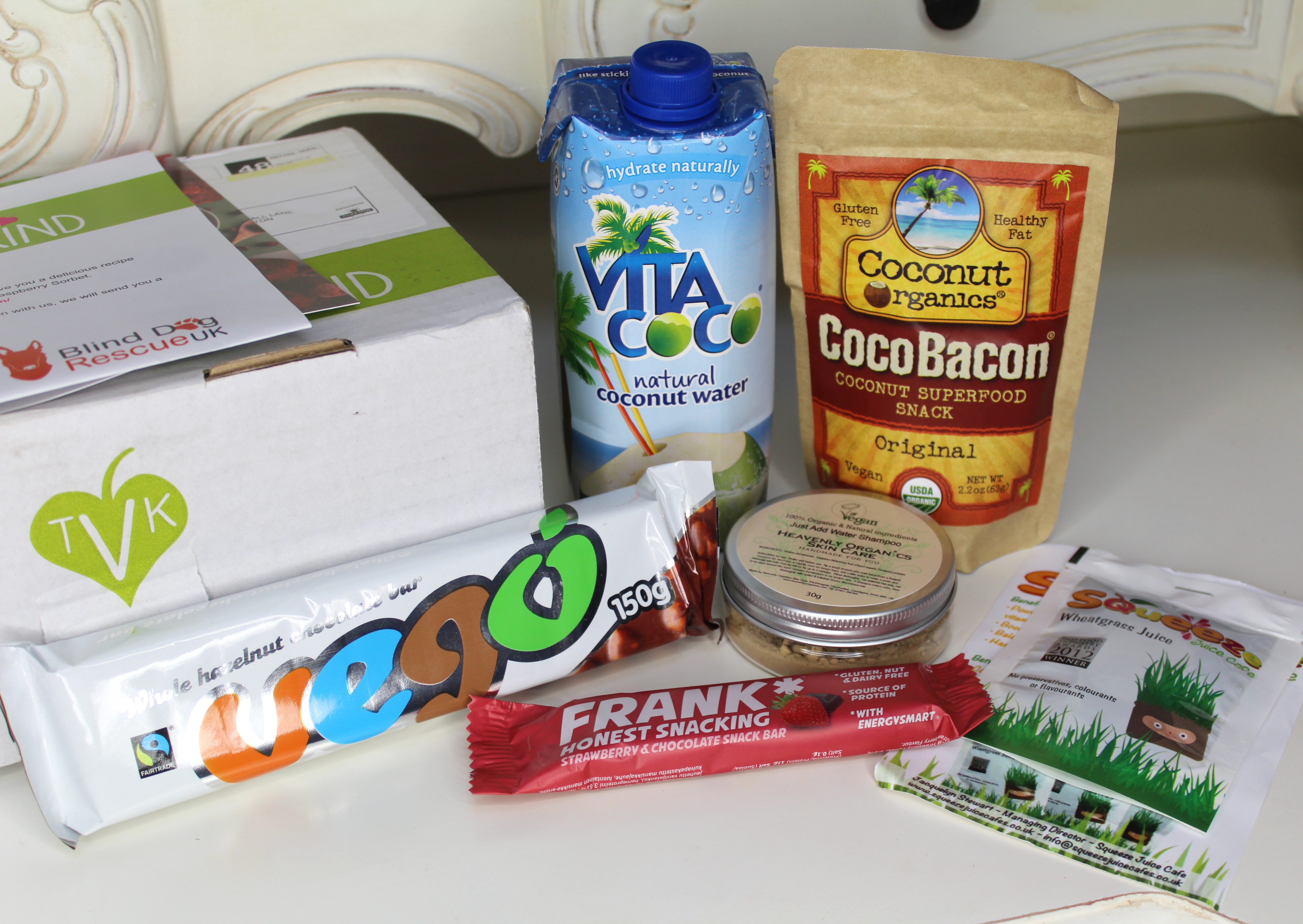 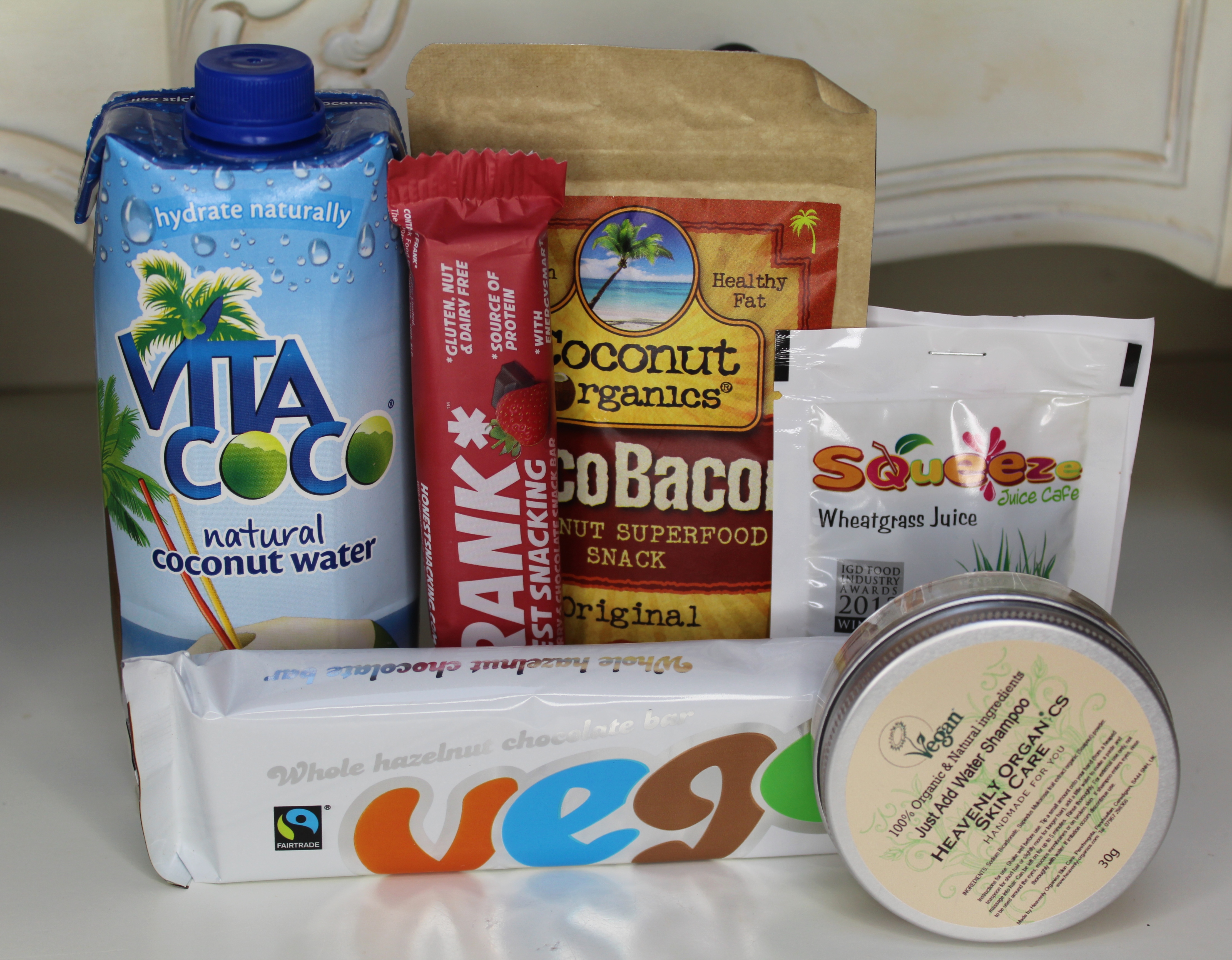 Its that time of the month again when I get a surprise from The Vegan Kind* through my door with their ever pleasing subscription box. You guys know the drill by now, its a box full of vegan goodies (food, beauty products, household products etc) and costs £10 per month + £2.95 P+P – you can subscribe here. I like posting what each box contains because then you will know if it is something you’re interested in subscribing to too! Each month TVK sends you a recipe card as well which is always fab – this month it was raspberry sorbet. Another great thing about TVK is that they donate 10p from every box sold to an animal charity of our choice (you vote over on their Facebook page) and this month the money went to Blind Dog Rescue UK. As usual I was impressed with this month’s box of goodies and below is what I discovered inside.

* Vego Chocolate Bar 150g (RRP £3.50) ~ Vego is a vegan chocolate bar made from the finest Italian chocolate mixed with hazelnut paste and hazelnuts. This is a beast of a chocolate bar as it is massive and boy is it tasty but at 1000 calories a bar I won’t be buying it too often. ~ www.vegochocolate.com

* Heavenly Organics ‘Just Add Water’ Shampoo 30g (RRP £2.40) ~ This is an interesting vegan shampoo which looks like something that would be perfect for those travelling. It is a shampoo paste which you add a little water to and then massage onto the head. It is 100% organic and natural which is always a bonus! ~ www.heavenly-organics.com

* Vita Coco 500ml (RRP £2.50) ~ I love Vita Coco coconut water (more so the flavoured ones) because it is natural, super hydrating and is full of nutrients, potassium and electrolytes so I was glad to see this medium sized carton in the box. Woohoo! ~ www.vitacoco.com/uk

*CocoBacon (RRP £2.35) ~ OMG this stuff is amazing!!! It may sound slightly odd but its so tasty and will be perfect on salads or as a nutritious snack. Yep, its bacon flavoured coconut and is 100% vegan. It is made from organic coconut chips which are lightly toasted and are given a bacon flavour using natural ingredients. What a creation! www.coconutorganics.com

* Frank Bar Strawberry & Chocolate Flavour (RRP £1) ~ A gluten free vegan snack bar made up of 100% natural ingredients from wholegrain oats to dried plums to coconut cream chocolate! Each bar contains about 4g of protein and also contains something called ENERGYSMART which is fruit carbohydrates combined with a grain which provides the body with more energy. I really like Nakd bars and this is quite similar. ~ www.thefrankfoodcompany.com

* Squeeze Juice Cafe Wheatgrass Juice 30ml (RRP £2) ~ Well after years of smoothie drinking and researching health foods I’d never tried a wheatgrass shot so I was pretty curious! I found it tastes pretty awful but the benefits are so worth the small shot sized amount of awful. Wheatgrass can give you an instant boost of energy as it helps oxygenate the blood. One wheatgrass shot contains 90 minerals and is equivalent to eating 1kg of leafy greens! Pretty good huh?! I definitely want to get more of these! ~ www.squeezejuicecafes.co.uk

What are your thoughts on this month’s box?